By the end of 1983 the team of Quester/Rossi took the European Championship after an outstanding season.

The new 3430cc engine developed by Alpina was bored to 92.6mm but used the standard stroke of 86mm. With a compression ratio of 11:1, crankshaft duration of 324°, 46mm intake and 38mm exhaust valves and a reprogrammed Motronic the engine produced 285bhp at 6000rpm. The new Alpina engine was available from the beginning of 1983 season. 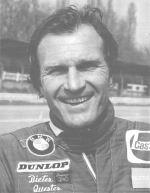 The opening round at the Italian Monza was a total success for the new 635 CSi. Dieter Quester (left) with co-driver Carlo Rossi won and the 635 CSi took 8 of the first 10 places !

With an average speed of 86.293 mph the trio of Thierry Tassin (Belgium), Hans Heyer (Germany) and Armin Hahne (Germany) won the 24 hour race at Spa-Franchorchamps in a 635 CSi.

In second place was another 635 CSi with Quester/Winkelhock/Rossi as drivers. Third place, and 12 laps behind, went to Lovet/Allam in a Rover Vitesse. 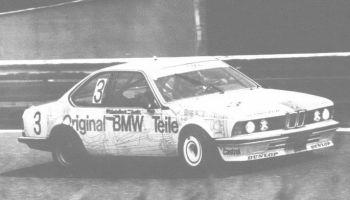 At Nurburgring 6 hour race the 635 CSi took the 6 first places !

This picture shows the winning car driven by Manfred Winkelhock and Dieter Quester.