The engine block was developed from the M49 racing engine that had been so successful in the mid and late seventies, and also from the M88 four valve per cylinder engine that powered the M1 mid-engined sports car. With such genes it was natural that the new engine was coded M90.

Standard gearbox was a 5-speed Getrag 265/5.70 and with a final drive ratio of 3.07:1 the 635 managed to accelerate 0-62mph in 7.3 seconds, top speed was 140mph. The suspension was modified with heavy duty roll bars, and so called "Anti-tilt blocks" (a.k.a. bump-stops) where mounted in the front strut springs. 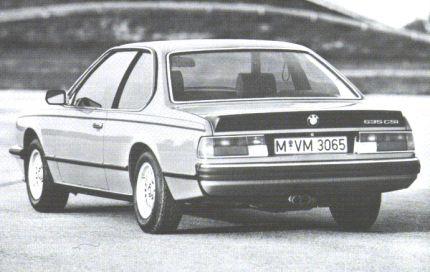 Other news introduced with the 635 CSi was 6.5 x 14 BBS Mahle cast alloy rims with 195/70 VR rubber, new front spoiler and a plastic/rubber back spoiler that reduced the uplift about 15%.

The  rear spoiler carried the BMW badge, as opposed to later models that had the badge mounted on the bootlid, this is unique for the 1978-79 635 CSi.

New engine in the US model

The US market had been screaming for more power in the only model available over there, the 630 CSi. A temporary solution to that problem was a special version of the 3210cc engine that where used in the 5 and 7-series four door sedans.

This engine included a 3-way catalyst with a Lambda sensor to control the exhaust emissions.

The new federal 633 CSi made a big difference even though it only had a minor horsepower increase, 177 SAE compared to 176 in the old 630 CSi, the major benefit was the improved torque, 196 lb.ft. The US version of the 633 CSi had the same Mahle rims as the European 635 CSi, and a new rear bumper.