Model range was unchanged this year. Both models, 630 CS and 633 CSi, where basicly the same as during the introduction the previous year.

There where no technical nor external changes on the 1977 models, so the pages covering 1976 could be used as a reference. 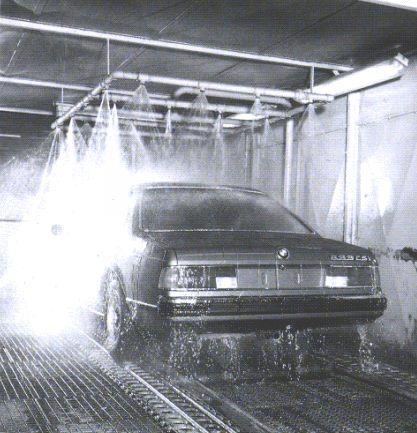 Improvements where made in the assembly line due to some of the early models where found to have problems with water leaks and body trim fitment. This lead to an improved high pressure water test that still today is part of the build and test process.

This picture is showing a 1977 633 CSi in the shower, a high pressure shower. This is one in a series of test to see if there is any leaks in the body.

Karmann constructed the 6 series coupe, as well as the earlier BMW coupes. In august 1977 this changed when only the steel body shell where made by Karmann and then shipped to BMW's plant in Dingolfing.

This was another result of BMW being concerned about the quality and one step to bring most of the assembly in-house.